Potomac Yard Real Estate sits on a 295-acre tract of land located in the northeast area of the City of Alexandria. The former railroad yard is linear in nature and is divided into two main parcels - Potomac Yard and Potomac Greens - by a 120' wide railroad corridor running through the tract.

Pulte Homes and Centex Homes teamed to create Potomac Yard Development, LLC, and purchase the 165-acre site on the south side of Potomac Yard from Crescent Resources in early 2005. Pulte and Centex are national developers/builders planning to proceed with construction of the mixed-use development as originally proposed: 1.9 million square feet of office space, 135,000 square feet of retail (in addition to the existing 600,000 square foot Potomac Yard Retail Center), and 1,700 residential units. In addition to the main body of the yard, there are two satellite landbays east of the rail corridor. Eakin/Youngentob and Assoicates (EYA) and Craftmark Homes are currently constructing Potomac Greens, a 33- acre residential neighborhood that consists of 244 residential units and approximately 20 acres of open space. EYA completed construction of Potomac Plaza, a 4-acre commercial node which includes 15,000 square feet of retail and 1-1/2 acres of open space along Slater's Lane.

This location is great if you want to be very close to Rte. 1, Washington DC, National Airport, Crystal and Pentagon City, as well as The George Washington Parkway. There are several restaurants as well as shopping just minutes away.

Potomac Yards History looking back to 1987, about the same time that the City began updating the 1974 Master Plan for the Potomac Yard/Potomac Greens portion of the site, RF&P Railroad began to explore development alternatives for the Yard because it was no longer being used for the classification of trains. The first proposal for the Yard, Alexandria 2020, was a mixed-use, neighborhood development which continued the street grid of the adjacent neighborhoods and replicated typical setbacks, heights, and architectural styles. The plan included a tree-lined interior boulevard, parks, and interesting pedestrian gathering places. The plan included a Metro station near the center of the Yard with the potential for commuter rail service and bus connections. The densities proposed in the 2020 plan were much higher than the currently adopted plan.

The 2020 plan was never formally submitted to the City for approval, but the City did approve new zoning for the site in the context of the Master Plan update in 1992. The new zoning, CDD, provided for a lower overall density of the development than was proposed with Alexandria 2020. Immediately after approving these development levels through the zoning of Potomac Yard/Potomac Greens, a proposal to locate Jack Kent Cook football stadium at Potomac Yard was pursued by the owner of the Potomac Yard tract. This proposal was successfully fought by the City, but as part of the negotiations related to the stadium, the zoning on the Potomac Yard/Potomac Greens site was changed to allow increased levels of development on the site.

In 1997, there was another proposed change to the CDD guidelines in the Master Plan in order to allow for the location of a Patent and Trademark Office at Potomac Yard. While the office buildings were within the maximum office square footages, a height increase was requested, as two other changes to the Master Plan CDD guidelines which were not related to the PTO proposal. One of the proposals was a change to the definition of the "rule of proportionality" which required a certain amount of residential development concurrent with any commercial development on the site, and the other was to permit a more dense housing type, stacked townhouses. The request was denied by the Planning Commission and withdrawn by the applicant prior to the City Council hearing. PTO subsequently located its offices at Carlyle.

In November 2018 when Amazon announced it selected Northern Virginia for its HQ2, National Landing was a big reason for that decision. Potomac Yard is the "South District" of National Landing, offering up retail, shops, distinctive homes, apartments with easy access to transit, and of course, walking distance to Crystal City, in Arlington.

Metroway Off to Strong Start

The new Metroway premium transit service, which opened in late August, has begun with a strong start, raising weekday ridership to nearly 1,500 per day. This exceeds ridership of the 9S bus (the Crystal City/Potomac Yard shuttle, which was replaced by Metroway) by 50% and builds on unchanged 9A bus ridership (which also operates through the four Alexandria Metroway stations). 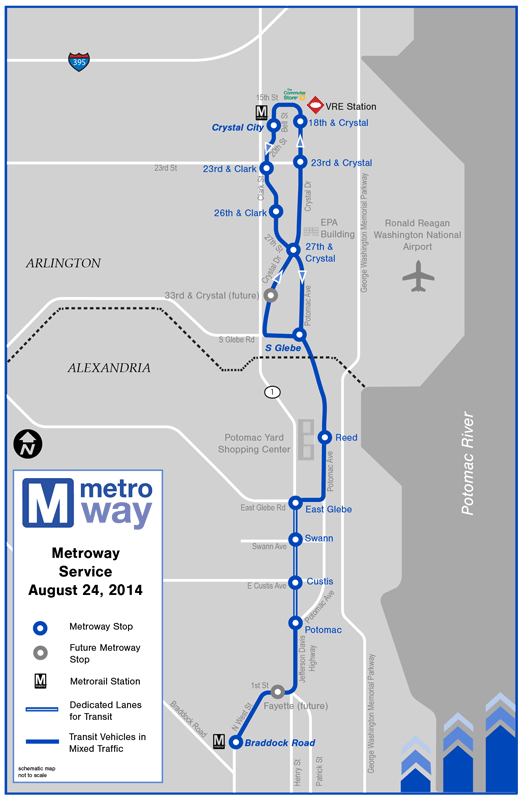 Here's a good overview map for the areas to the east of Rte 1 (Jefferson Davis Highway) that is knows as Potomac Yard.

Kevin Adler–a breakout agent in the Greater Washington area–brings over a decade of Real Estate expertise to the table. Whether listing your property, or finding your perfect home, Kevin’s eye for detail and scope of resources will allow for a swift and uncomplicated transaction.